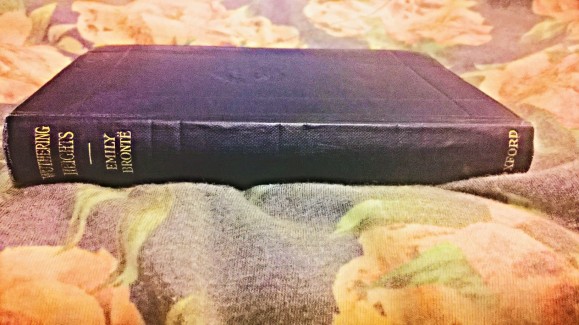 Where did I get this book: This copy was from the amazing haul of books from our neighbour’s friend who died

This is my favourite book of all time.

It is an absolute masterpiece; I love it so much.

I read Wuthering Heights for the first time when I was 11 or 12, and understood probably less than half of what was going on. But I loved it. I loved the atmosphere, the drama, the darkness and the gothic. And oh my word, did I love Heathcliff. It is not an exaggeration to say my idea of what romantic love should be has a lot of its foundation in the character of Heathcliff. Oh dear.

I read it again at about 15, and then later studied it at school for A Level English. I hated having to pull it apart. I still find a lot of the criticism of the book to be stupid. I usually love analysing character motivations, events in a story, and relationships between people, as if they were real. But this book is different. It is a book of pictures, of poetry, and of rawness. It is like a child managed to take all their uncultivated emotions and wildest fantasies, and express them in the most eloquent and powerful way possible. To wonder about character consistency, how people ‘really’ feel about each other, and what motivates them – is to spectacularly miss the point. You may as well wonder what motivates people in your dreams. It is fantasy. Pure fantasy hewn from the mind of a genius who somehow managed to take those hills, those moors, that weather and all the feelings they provoked in her, and turn them into words on a page. Fantasy is not what you want to happen; it is what you want to imagine happening. Several times in her life Bronte turned her back on too much time-consuming reality, to retreat back to the parsonage and to more time spent focusing on the incredibly rich inner workings of her own mind. And because she lived as much in a world of fantasy as reality, she taps into a base and primal energy that normally stays in the subconscious of an adult – and it turns out that her fantasies were the best ever.

Heathcliff isn’t an ideal man (something I admittedly failed to grasp until I was older than 20!) but he is the ideal fantasy because he makes the best story. I don’t care that most of the characters are foul (and I normally do; I generally have a very old fashioned preference to like characters in a book); and I don’t care that the events are excessively melodramatic and stretch credulity (in fact I like that very much). This is a story that feels like part of who am I; part of what made me me. Not only did this story permeate me in some magical way (I do think that books we really love before the age of about 14 or 15 become part of our soul) but it is also one of the reasons why books, and reading, became a big part of my life. Look at what this story can do. Look at how brilliant it is. More more more please.

I have read it several more times since school. And it stands up. I get something new every time. And every time my love for it is renewed. This time I discovered a new affection for Edgar Linton, a character I always previously felt was laughably pathetic compared to Heathcliff. Don’t tell my teenage self, as my friend said. But he is wonderful, and actually becomes truly admirable in his role as a father after Cathy has died. Which, let’s be honest, might be why I liked him this time. Heathcliff’s credentials as a father are hardly outstanding. This read was prompted by taking my ten year old daughter to Haworth for an adventure away, just the two of us. I read her the first three pages before she said: “Mummy, this is too tricky to understand.” But by then I was hooked. (We found a beautiful graphic novel version at the parsonage, with the original language, but the pictures make understanding what is going on much easier. I am happy to say she is now devouring that herself, hurray!)

I wasn’t looking forward to writing about this book. It’s like having to write a review of my mum. She may be flawed, but she made me who I am and I love her from the depths of my being.

I didn’t want to analyse the plot, the construction, or the characters – but just write a little bit about what it means to me.

As Nelly says of Heathcliff: “From childhood he had a delight in dwelling on dark things, and entertaining odd fancies.” So did Emily Bronte. And so do I.