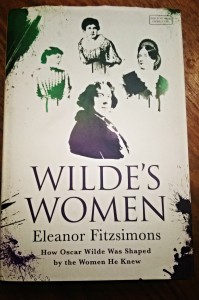 Where did I get this book: A 38th birthday present from my husband (requested after spotting it on twitter).

It was strange to be reading this book during my visit to Paris. My love for Oscar Wilde began in 2000, the same summer as that first visit, when I read De Profundis. Prior to that, I’d only known about Wilde’s plays: the wit, the aestheticism. Which is all brilliant – but seemingly shallow, as Wilde would, and probably did, admit to. But De Profundis is different. It is a wonderful book about a man brought so low, stripped so bare and made so vulnerable, that the resulting self-examination, and honesty to the point of humiliation (or so I thought), is amongst the most moving non fiction I have ever read.

When I later read The Secret Life of Oscar Wilde by Neil McKenna in 2003, it started to chip away at the picture painted in De Profundis. Relating to some of the things Wilde talks about in heartbreaking detail, McKenna discusses evidence that they weren’t true. I ended up having an email conversation with McKenna following my reading of that book, as I was struggling to cope with the fact that chunks of De Profundis were inaccurate. That what had appeared to me to be the ultimate journey of self discovery was, at least partially, a fabrication. (McKenna was very kind in response to my distress). Wilde did warn me, I guess, that “Only the shallow know themselves.”

Later still, I came across discussion of whether some of Wilde’s sexual preferences would in modern times be considered to be child sexual exploitation. Indeed Fitzsimons confirms in this book that some of the people Wilde slept with were very young indeed. This was even more distressing. He was my hero. I had spent hours poring over an exhibition of more obscure Wildeania in the British Library. My response to “Where would you go if you could travel in time?” had always been “To see Oscar, and let him know that he is vindicated.”

So, reading Wilde’s Women is the latest episode for me in what has been a gradual realisation that my hero is not so heroic.

I should say that it is a thoroughly entertaining read. There is no doubt that Wilde’s life was fascinating, and Fitzsimons’s exploration through the lens of female companions during good and the bad times, works well. But this was the final knock off the pedestal for me. For example, we know he spent vast sums of money on entertaining Bosie, but I hadn’t realised this was at the same time that his mother was living in borderline poverty. And that he barely helped her.

It is an experience reminiscent of reading Go Set A Watchman. Wilde was another Atticus for me. And while it is distressing to have your heroes exposed, ultimately it can be liberating. As what you’re left with is your own devices, your own moral compass, and your own judgement.

It feels like a 16 year full circle. I take away the things that he taught me. But my stabilisers are off, and I’m cycling without support.