The Book Of Strange New Things 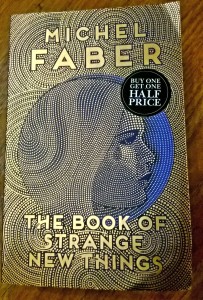 Where did I get this book: Lent to me as an “If you liked The Many you might like this…” read.

The book of strange new things in The Book Of Strange New Things is the bible. And in many ways this story is written like a gospel. The gospel according to Peter, our protagonist who travels light years to act as preacher to the native population of ‘Oasis’, a distant planet being colonised by a shadowy corporation.

We have the creation of a church, in both the congregation and the physical building sense; we have a period of temptation in the desert, and even a resurrection of sorts. (I can’t seem to get away from them at the moment in the books I’m reading).

Many of the ‘Oasans’ embrace Christianity wholeheartedly, for reasons we don’t fully understand until the end of the book. And what struck me is how unusual it is to read such a sympathetic depiction of Christianity in fiction. Maybe it’s just in the books that I read. But corruption within large religious institutions, and church authority figures abusing their power, seem much more frequently visited and attractive literary fare than well-intentioned Christian people with real faith.

That’s not to say that Faber depicts his Christians without flaws. Peter begins as an emotionally generous, vulnerable and kind preacher and husband, who is occasionally insufferably smug. And ends up being largely insufferably smug and self-absorbed, with the occasional moment of generosity and kindness.

Peter’s wife Bea has remained back on a troubled and violent Earth, and the only communication between them is essentially email with no attachments allowed. What emerges through these epistles is that this book is really about language; specifically the limitations of language in our communication with each other, and in expressing what it is we really mean. When we can’t see each other, or indeed when we’re talking to an alien with no discernible features, words are often insufficient. In the beginning was the word. But the word isn’t enough.

Interestingly for someone who is so beautifully in command of English, Faber covers a whole spectrum of communication problems in this book, from the great challenge of conversing with an alien race that has no faces and no vocal chords, to the inadequacy of words to describe what God means to different people, to a husband and wife annoying each other with poorly chosen phrases in emails.

I don’t know if it’s relevant that Faber writes in English, which is not his mother tongue. Using another language does open you up to the way we construct our surroundings through words; when I lived in Italy I experienced myself that the more of the language I learned, the more of the culture I understood. This doesn’t happen with your first language; your mother tongue ‘just is’, rather than illuminating the role that language plays in a distinctive way of seeing the world. Language is imperfect, so it can never convey what actually is, just a version of it. And the version conveyed is different in each different language.

Reading this book is like dreaming whilst awake. The pace is slow and steady, with a mesmerising quality that creeps up on you. The star of the show is Faber’s completely convincing, and completely engrossing, creation of the strange new world on Oasis. While I didn’t particularly warm to any of the individual characters, this is one of those books where just being in that world is enough to make nearly 600 pages whip by.

The Book Of Strange New Things is a gentle tale of God, language, and the limitations of both. Impressive stuff. But even if all you take away is a renewed appreciation for the importance of thinking carefully before you press send on that email, it’s still worth a read.