So, what is the best Bond film? The results are in! 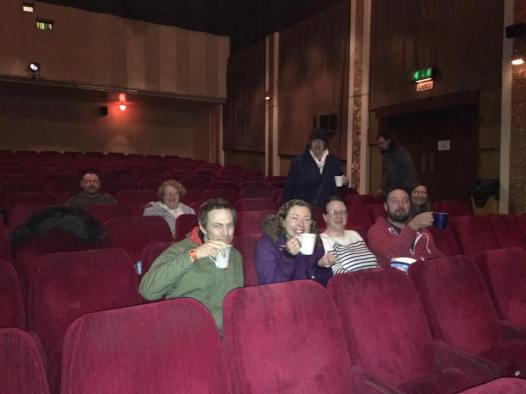 Following a momentous date to watch SPECTRE at the end of 2015, the Newsome sisters embarked on one of the greatest challenges in the history of cinema. Enough debate. Enough uncertainty. We set out to discover which is the finest Bond outing of all time. Read about the background to the challenge, and our relationship with the man himself, here.

And on 27 December 2016, at the illustrious Rex Cinema in Elland, the great Bondathon came to an end in style, with a showing of what can now, once and for all, reliably be called the best Bond film. The methodology was scientific. It involved a spreadsheet (oh, what a spreadsheet); it involved much deliberation; it involved industrial quantities of wine. There’s no arguing with that.

So, what was it? I can see you teetering on the edge of your seat…

I can reveal that the accolade goes to… Casino Royale. The 1967 David Niven classic.

No, only joking obviously. It is the gorgeously slick, cool and oh so sexy 2006 film that marked Daniel Craig’s debut as our hero.

What is perhaps more shocking (see what I did there?) is that there is no Connery at all in the top three. Many will be surprised that Dalton’s second outing, Licence to Kill, came so close to winning. It is only one point behind our victor (the crucial deciding point being a bonus for Craig’s arm muscles, ironically enough awarded by Sally who married a man because of their mutual Dalton love, and called their son Timothy). But science is science.

Licence to Kill may seem an unlikely runner up. But it has perfect scores for ruthlessness of Bond, quality of action overall and gender equality, as well a great (and definitely underrated) Bond girl in Carey Lowell’s Pam Bouvier. It provided one of the biggest delights of rewatching all the films; it is an absolute corker.

And on to number three. While we all mock Moore, and consider him to be the most rubbish Bond of all, there proudly in third place is The Spy Who Loved Me.

One of the most interesting findings in a huge raft of interesting findings of the Bondathon is quite how inconsistent most of the actors are in the role. We all think we have an idea of ‘Connery Bond’ and ‘Moore Bond’, but really there is no such thing. Connery in Dr No is a staggeringly swoon-inducing hero from start to finish, scoring highly on all the Bond-specific categories (including an almost perfect 29/30 for phwoarr factor), but Connery in Goldfinger made me want to throw things at the TV he is so sleazy.

So, while Moore is often ridiculous, particularly in the later films when he becomes borderline geriatric, the truth is that in The Spy Who Loved Me he delivers a heartfelt performance of a man you almost (almost) believe could actually save the world and get the girl. The Spy Who Loved Me does place so highly largely due to non-Bond-specific categories. It gets perfect 30/30s for pre-title sequence, theme song and music, and henchmen for example. But if you’d told us when we embarked on this project that a Moore would make it into the top three, we would’ve laughed as hard as Baron Samedi sitting on the back of a train.

One finding that was unexpected, and brilliant, is that the top five films all star a different actor. We certainly would have similarly guffawed if you’d told us Brosnan would get within sniffing distance of the top ten. But it turns out that Tomorrow Never Dies is superb.

Here are the overall rankings of all Bond films. 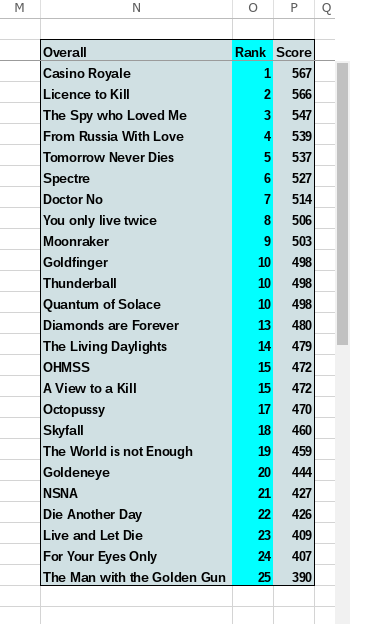 While Casino Royale was our overall winner, it is interesting to note (is it? Are you still with me?) that when you break the scores down into our individual contributions, this only topped Katie’s poll. My favourite was From Russia With Love (which I think is right, oh how I love that film), and Sally’s was Licence to Kill. But we are broadly in agreement about which films make up the top five or six Bond outings.

There are so many ways to look at the findings of the Bondathon. By film, by category, which films divided opinion the most, the trends over time (and where you would expect trends over time, such as a gradual improvement in gender equality, that unfortunately just doesn’t happen). Who is the best Bond by film, or best Bond by Bond-specific criteria? What would the perfect Bond film look like if you took the most successful aspects from each of them? It is all too delicious for words.

It has genuinely been some of the best fun I have ever had. 2016 was a very special year; a trip down many memory lanes. And despite the fact that they fail to understand that Moonraker is utterly amazing, and Skyfall is utterly dire, it has been a rediscovery, if one were necessary, of how much I love being with my sisters, how much they make me laugh, and how important it is to spend time together conducting globally significant research.