The Garden of Evening Mists 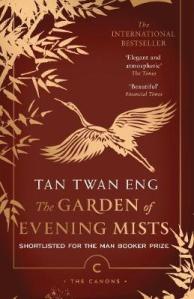 Where did I get this book: A kindle read

Books like this are the reason book clubs are wonderful. Well, one of the reasons. Along with that business of making friends. And there’s the gin, of course…

I had never heard of The Garden of Evening Mists and, even if I had, I probably wouldn’t have read it. Which would have been my loss. Because this book is beautiful.

Yun Ling Teoh is a newly retired Supreme Court judge in the Malaysia of the 1980s. She returns to the estate and Japanese garden she helped to build many years earlier, which has now been left to her by her former employer, Aritomo, an eminent garden designer. Yun Ling has left the bench, it turns out, because her memory is starting to fail. So, she takes the opportunity to record the events of her extraordinary life while she can still remember them.

During World War II, she was imprisoned in a Japanese internment camp and was its sole survivor – hundreds of others, including her own sister, lost their lives – and these events haunt her throughout her life and throughout the book. We follow her experiences building the garden with Aritomo in the aftermath of the war, interspersed with the sections looking even further back, and from the 1980s as she reflects on her whole life.

We learn what happened in the internment camp – and about the Japanese occupation of Malaya, the myths, the reality, and where these two things might overlap.

The most extraordinary thing about this book, with hindsight, is how soothing it manages to be while describing so many events of horrific brutality and sadness. It has an almost mesmerising quality – sometimes it is only as you close the cover and reflect on what you just read that you realise it was all awful. I don’t know if that’s a good or a bad thing?

The country that was Malaya is so vividly realised here, as are the philosophy and the practicalities of Japanese gardening. It’s an education that feels like a meditation.

What stuck with me most strongly, though, was its strangely amorphous – misty even – sense of hope. That even the most deep-rooted hatred can be overcome; in the right circumstances our prejudices become insignificant. But that also, in the end, it may just be that we’ll forget everything anyway.

It’s this melancholy mix of the heartening and the heartbreaking that makes this book so special.